I Told You So. The Left Is At War

I told you so. The Left is at war. Indeed, I receive no joy in writing these words. Last July, I warned people that something terrible was afoot. On July 2nd of 2020, I wrote that defunding the police reminds me of the French Revolution. I continued:

Recent protestors across the nation and some leftists in some city governments have promoted the defunding of police departments. They appear to be pushing a continuation of the desires of the 44th President (Obama) to “fundamentally transform” the country. Somehow, “tearing down the system,” as the leftist groups call it, includes defunding the police departments. I am not sure how to address crime in America with poorly funded police departments.

I am reminded of the history of France when they wanted to tear down their system, and they stormed a prison and released the prisoners. In some ways, the present-day policy of no requirement for bail money is similar to opening the prison gates. Open borders policy also seems to fit nicely with this rhetoric of tearing down the system, for a country with no borders is not a country. With little or no police force and no Immigration and Customs Enforcement ICE, does one live in a nation?

A year later, when a reporter asks Joe Biden a question regarding the police, the following dialogue occurs: Joe Biden had a chance to condemn the Democrat-run cities defunding the police around the country, but he refused. So instead, he bizarrely responds: “Are there people…who think we’re sucking the blood out of kids?” pic.twitter.com/LpOaQSTGed — RNC Research (@RNCResearch) July 23rd, 2021.

Mr. President, answering a question with a non sequitur isn’t a denial. So, to answer your question, yes, the most recent data from USA Facts indicate that over 680,000 babies get their skulls crushed and their brains sucked out each year. It is called abortion. Additionally, the Biden Administration has reissued an Obama executive order that threatens the practice of doctors that treat Medicare and Medicaid patients if they refuse to treat people requesting a gender reassignment. To learn more about the mutilation of children and how to stop it, visit StopCSE.org or visit American College of Pediatricians.

Another I told you so

I’ve heard the accusation before about the Political Left. “Let’s create a problem, then ask the voters to elect us to solve the problem.” So, here we have “protestors” (most didn’t appear to be American Indians) protesting about the images on Mount Rushmore. Add to this, multiple photographers were photographing the police and national guard. Then add a guest on camera to talk about “White Supremacy” and the evils of the founding of America. Then, you have the media and Democratic leaders repeat the words of the guest without reporting it as a quote from the guest speaker’s script. It seems the Left is escalating the culture war beyond just a battle of ideas, and patriotic Americans are their enemy.

Today, Critical Race Theory Curriculum has been exposed. Is there any doubt that the Left is escalating the culture war?

The COVID-19 is new, and the human body has not built a practical immunity to it. Marxism is political cancer. It can be easily treated with a healthy diet of common sense. It must be administered early and often. If not, then drastic countermeasures such as war have to be conducted.

I wrote the quote from John Quincy Adams, “Duty is ours. Results are God’s.” Then, I told the story of how John Adams instilled values in his son John Quincy. Then, John Quincy Adams made his mark upon Abraham Lincoln. Finally, I mentioned that Elijah wanted to lay down and die, but God made him find a replacement.

This constant onslaught of misinformation regarding masks, vaccines, and politics makes us want to lie down and give up like Elijah. But, we must press on for liberty. It is so tempting in dangerous times to hope our leaders will make us safe. Yet, it is wise to remember some words from Benjamin Franklin. He said,  ‘Any society that will give up liberty to gain security will deserve neither and lose both.’

Ask not for whom the wolf stares; it stares for thee. 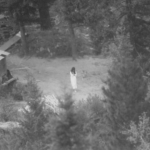 Vicki Weaver as seen from a USMS surveillance position on August 21, 1992

We are in perilous times. We were in perilous times a year ago also. Not enough people have awakened to see the wolf that is staring them down. Three weeks will be a year since I wrote about the wolf. A wolf we were warned about by Gerry Spence. Please find his book or at least read his letter. A letter about events from three decades ago: we Americans embrace the myth that we live in a democracy and that we are free. We know the truth that we are not a democracy, and we are not free. The government no longer serves us but rather subjugates us instead. The government is now the people’s master.

It is time to wake up. It is time to act. Our 45th President was framed! A coup d’etat was run on a duly elected president. And, if anyone challenges the integrity of the general election, they are considered an enemy of the state. There is an invasion of illegal immigrants at our southern border. Our medical privacy is in jeopardy, and the wolf claims that he will protect us with a shot, a mask, and a medical passport.

On the first day of the Texas 87th Legislative, I asked every Republican that would listen, “What are y’all going to do to keep the Democrats from breaking quorum when you vote on election integrity legislation?” Every one of them laughed and said, “They are not going to do that.” I responded, “They just took down the president; what makes you think they are going to stop now?” I had to bite my tongue when the Democrats walked out. I wanted to say, “I told you so. The Left is at war.”

After a special session was planned, I asked, “What makes you think the Democrats will come back?” I was laughed at once more. The Democrats fled to Washington D.C. shortly after the session started. The Republicans told me, “They’ll be back when they realize how foolish they look.”  Well, as July draws to a close, the quorum is still broken. Texas is in danger of being the victim of election fraud while simultaneously being invaded. I guess it does no good to say, “I told you so. The Left is at war.”

Metaphors of Wheels,Water & Medicine
What Do We Tell Our Children?