If Paul Revere were alive today, he would jump on Twitter and exclaim, “COVID-19 and Marxism invaded America! COVID-19 and Marxism invaded America!” If we listened, what would we do? Would we duck and cover? When I wear a mask, I can’t help but think we have been here before. I am uncertain if that mask is going to help me any more than my school desk was going to save me from a nuclear bomb. I suppose it was a good thing Japan didn’t have those rugged American desks, or they might have won World War 2. People with good intentions were racking their brains, trying to reduce the risk of a nuclear attack. Hiding under a desk would have been a futile endeavor indeed if the missiles had ever launched.  It probably wasn’t a good plan looking back on it now, but at least it was a plan, and I suppose any idea may have been better than no plan at all. Fortunately, despite nuclear proliferation, there have been very few nuclear explosions and none on American soil. Thank God for that! 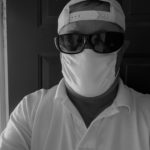 Likewise, today, people with good intentions are racking their brains and trying to reduce the risk of a viral attack. Some of the defense plans seem just as futile as those plans during the cold war. In my opinion, wearing a mask stops a virus about as well as a chain-link fence stops a mosquito. Experts claim the mask prevents water droplets from getting through, and the virus lives in those droplets. Experts disagree on the usefulness of a cover, knowing who and what to believe is almost impossible. The experts contradict each other and even contradict themselves. Sadly, there are also people with bad intentions that are exploiting the situation.

There are not one, but at least two diseases creating a crisis in our country. The Corona Virus, known as COVID-19, traveled across the globe from Asia. There is a consensus that it came from China. Some believe it escaped from a lab in Wuhan. COVID-19 invaded America rapidly. The other disease creating a crisis in America is Marxism. It came from a man named Karl Marx. It has crept into America slowly. In many instances,  it was spread by well-meaning people. It is a sad irony that now, the communists that were going to drop bombs on us in the Sixties educate our college students, run the news stations, and control at least one of our political parties. They’ve just about taken over the whole country without even firing a shot. 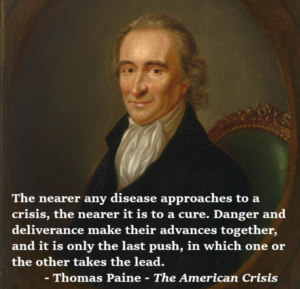 The COVID-19 is new, and the human body has not built a practical immunity to it. Marxism is political cancer. It can be easily treated with a healthy diet of common sense. It must be administered early and often. If not, then drastic countermeasures such as war have to be conducted. Wars lead to futile contingencies such as duck and cover drills. Both diseases reached America from Communist countries. Both diseases cannot be avoided.

A man who knew a lot about Common Sense wrote some encouraging words that are as applicable today as they were when he wrote them. Thomas Paine espoused that danger and deliverance make their advances together. The full quote is in his picture. Although, Paine’s words apply to the medical health of a human. It refers to the political health of a nation as well.

We have been here before. Any society that will give up liberty to gain security will deserve neither and lose both.

A Monarchy, an Oligarchy, and a Dictatorship are all top-down authoritarian governments. Individual rights are violated. The leaders only allow individuals to have privileges. These privileges are handed out capriciously and subjectively. Tyrants love these types of governments as long as they are the leaders. Marxism is a perfect vehicle to transcend downward into these types of governments. People become ruled by men rather than governed by law when these regimes metastasize. Although the Marxist mutation had not infected the world yet, Paine was well aware of the behavior of tyrants.

America was at war while Paine wrote. Paine referred to that time as a crisis, and we are in a similar situation again. Crisis scare people. Paine was trying to encourage Americans. On September 12th, 1777, Paine wrote a pamphlet titled Those who expect to reap the blessings of freedom. Near the end of his work, he wrote, ‘We know the cause which we are engaged in, and though a passionate fondness for it may make us grieve at every injury which threatens it, yet, when the moment of concern is over, the determination to duty returns. We are not moved by the gloomy smile of a worthless king, but by the ardent glow of generous patriotism. We fight not to enslave but to set a country free, and to make room upon the earth for honest men to live in.’

It is so tempting in dangerous times to duck and cover while hoping our leaders will make us safe. I conclude with a reminder and a piece of advice. The reminder is: As a nation, we have been here before. The advice comes from Benjamin Franklin, ‘Any society that will give up liberty to gain security will deserve neither and lose both.’