Duty Is Ours Results Are God’s

Rick Green sent me a quote. “Duty is ours Results are God’s.” Rick Green sent me a video of himself at the House of Representatives Chamber of Congress Hall in Philadelphia. Rick talked about John Adams and his son John Quincy Adams. John Adams was a principal figure in the founding of the country and the creation of the Declaration of Independence. He had been the Vice-President for eight years before he was elected President. He served as President from 1797 to 1801. John Adams instilled in his son a hatred for slavery. John Quincy Adams was our sixth president serving from 1825 to 1829. After John Quincy Adams’s presidency, the younger Adams became a member of Congress for seventeen years. Rick’s video gets real interesting at this point.

During John Quincy’s tenure in the United States House, he becomes known as the “Hellhound of Abolition.” His colleagues asked him why he continued to bother with abolition. It was apparent that he was not making any progress in his fight to abolish slavery. His reply was, “Duty is ours. Results are God’s.” Another thing that happened during John Quincy Adams’s house tenure is that he befriends and mentors a young representative from Illinois. 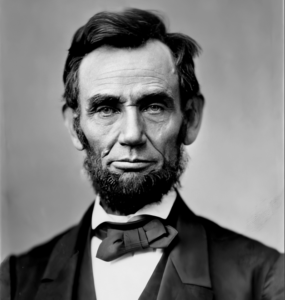 The Passing of the Baton

That upstart from Illinois became the sixteenth President of the United States. Abraham Lincoln was successful in ending slavery. He was able to achieve what John and John Quincy Adams could never achieve. The elder and junior passed the baton. They fulfilled their duties, and God provided the results by using Abe Lincoln.  Although it cost Lincoln his life, he was willing to pay that price for such a noble cause. A cause instilled in him by the Adams family.

This great story gives me courage. It reminds me of a chapter in my new book. I discuss the scripture where the prophet Elijah wanted to lay down and die when he heard Jezebel was going to try to kill him. God told Elijah to prepare another prophet to take Elijah’s place. Elisha was trained by Elijah to carry out the results God wanted. Elisha and others were instrumental in liberating the Jews from a despot ruler. Likewise, Lincoln liberated the slaves from the tyranny that befell them. It is good to be reminded not to grow weary in well-doing. Why? Because: “Duty is ours Results are God’s.” Do you know what your Duty is?

Gross and Dangerous Can Describe Our Lives
All Of Us Are Like Paltiel, A Sad Story