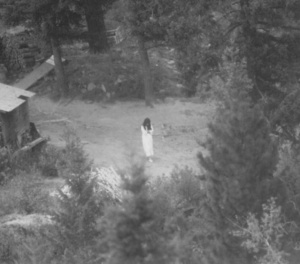 Vicki Weaver as seen from a USMS surveillance position on August 21, 1992

A fantastic website titled Famous Trials by Professor Douglas O. Linder contains an intriguing article. The URL for the site is https://famous-trials.com/. The site includes a story about Gerry Spence, the famous lawyer from Wyoming that defended Randy Weaver in the incredible Ruby Ridge Trial in 1993. The URL for this particular story is https://www.famous-trials.com/rubyridge/1143-spenceletter  Mr. Linder received permission to use excerpts from Mr. Spence’s book titled From Freedom to Slavery, the Rebirth of Freedom in America (1996)(pp. 13-50.  I will attempt to paraphrase a portion of the story of Ruby Ridge and expound upon the relevance it has for today.

Mr. Spence described the first time he met Mr. Weaver in jail. His description indicated that Mr. Weaver was small and frail. Randy spent 11 days and nights in a stand-off against the government and lost. His wife and son were killed. Randy’s friend was near death, and Randy was wounded and had lost his freedom. He had lost just about everything. Most people may not care if Mr. Weaver lost everything. He did not fall within the bell curve of what is considered normal—Randy associated with people that hated Jews and sympathized with the Nazis. When Mr. Spence told him he would not defend his political and religious beliefs and would only support his right as an American citizen to a fair trial, Randy was okay with that.

Randy Weaver’s main crime was his failure to appear in court on a charge of possessing illegal firearms. He was entrapped by a federal agent who solicited him to cut off the barrels of a couple of shotguns. He had never owned an illegal weapon or engaged in the manufacture of such. The government knew he needed the money. He was poor and had three daughters, a son and a wife. They lived in a small house in the woods without electricity or running water and made a living by chopping firewood and as a seasonal logger.

Although his beliefs were erroneous and he failed to appear and defend himself in court, Mr. Spence contends that the first wrong was not his nor the government. The first wrong was ours. We Americans embrace the myth that we live in a democracy and that we are free. We know the truth that we are not a democracy, and we are not free. The government no longer serves us, but rather subjugates us instead. The government is now the people’s master. Americans have stood by like sheep while the wolf killed the weak, the strays, and those on the outer edges of the flock.

Our delusion that the wolf makes us safe

At last, the entire population belonged to the wolf, for we did not care about the weak or the strays that seemed not to be a valid part of society. Eventually, the wolf worked to the heart and center of the crowd; now, we all must look at the wolf, squarely in his eye. It was wrong that we did not defend the weak and vulnerable. None of us felt responsible, for we did not direct our attention to the power-hungry wolf but rather the deviant members of our society. We rejoiced when the wolf destroyed our enemies. We exclaimed the predator had merely help purify the flock. Over time, we became secure under the rule of the wolf. We deluded ourselves into believing that belonging to the wolf made us safe from all the other wolves. Yet, we were all eaten just the same.

The poor, the forgotten, and the damned seemed unimportant

We forgot the battle cry of Patrick Henry, “Give me liberty or give me death.” Now, we sit on our hands as a Deep State Wolf King is crowned, and we barely lift even an eyebrow when our neighbors are wrongfully seized. We capitulated to King Wolf when we allowed a regime to take control that is no longer sensitive to people. The government is only sensitive to corporations, money, and power. King wolf became king when we allowed the poor, the forgotten, and the damned to be rendered mute and defenseless. This happened not because they were evil, but because in the scheme of our lives, they seemed unimportant.

We cheered for King wolf as it diluted our right to be secure in our homes against unlawful searches and to be safe in the courts against illegal evidence. Again, we cheered King wolf because someone told us our sacred rights were nothing more than “loopholes” for our enemies. We were told that murderers, rapists, thieves, and drug dealers used those loopholes to escape justice.

We lost our rights as well

Once again, we were taught to believe that lawyers who fought for our rights we’re worse than the thieves who stole from us. Furthermore, our juries were irresponsible and ignorant, and we watched almost silently as the legal system that used to protect us became populated with judges who were appointed by the wolf. At last, the wolf received his crown when we forgot the lessons of history. The lesson that when the rights of our enemies have been wrested from them, we have lost our rights as well.

Twenty-eight years after Ruby Ridge, the Wolf Is Bolder Now

The attorney Gerry Spence prevailed in the courtroom by skillfully and accurately pointing out the abuses of the government in unlawfully destroying the life of Randy Weaver. It was in the news, and at least one movie was made, and sadly the American public forgot. The wolf was never chased entirely away from the flock. Twenty-eight years later, the predator’s regime is alive and well, and the evidence of their existence is prevalent in the swamp called Washington. In the swamp, the wolves are bigger and more vicious and hungrier than ever. They are no longer satisfied with the lives on the fringes of society. Their hunger is for the President of the United States.  Not just the forty-fifth president, but for all future presidents. They want all inhabitants of the country to be under the capricious will of the Deep State.

The question is: Will we once again turn a blind eye? Will we sit on our hands once again? The wolf pack is the deep state, and they tried to frame a presidential candidate! They ran a coup d’etat on a duly elected president. Who are they? A good question. Members of the Canus lupus species are embedded throughout the federal government, academia, and the media. We know who the wolves are by the way they act. They devour by abusing the civil rights of the individual. By adapting the words of Hemingway and John Donne, I conclude. Ask not for whom the wolf stares; it stares for thee.

600 Words About Me
Pray That The Ground Swallows Our Enemies