For Such A Time As This And I Feel Fine

This photograph of an early 3rd century CE Roman painting of Esther and Mordechai from the Dura-Europos synagogue in Syria portrays a famous Jewish story. This story is in the Bible in the book of Esther. There is a well-known phrase in Esther 4:14 that is repeated often, “For if you remain silent at this time, relief and deliverance for the Jews will arise from another place, but you and your father’s family will perish. And who knows but that you have come to your royal position for such a time as this?” This phrase is used often and taken out of context to justify countless arguments. So, let’s back up and dig into the book of Esther.

The story begins with a kingdom located where modern-day Kurdistan lies today. The Achaemenid kingdom stretched from India to Egypt. Many of the Israelites were led captive there. The Achaemenid King disposes of his queen, conducts a beauty contest for a new queen, and chooses an Israelite woman. Her cousin Mordechai learns of a plot to commit genocide on the Israelites and convinces his cousin, Queen Esther, to talk to the king.

What is your faith journey?

Queen Esther appears to live in a gilded cage. I use this phrase because she seems to live a life of luxury as the queen, yet one wrong step and the king could have her killed. When Mordechai pleas for Esther to talk to the king, Esther explains she could die. If Esther appears before the king without him asking to see her first, the king may kill her. Mordechai replies by expressing the possibility that Esther may be where she is in life to carry out this duty. Mordechai insinuates that God can use anyone at any time to do His will. Life may be difficult, but it may be far worse if one does not act upon the opportunity God sets before them. Mordechai challenges Esther to have the faith to try and save her people while risking death for herself. Esther’s story is about her faith journey.

Don’t shrug off your responsibility.

A faith journey is what I want you to consider. What is your faith journey? Is there something you are supposed to do for such a time as this? Let me ask you another way. Look at the calendar. We just celebrated Thanksgiving. Advent has begun, Christmas and New Year are on the way. Based on your faith, is there something this time of year that spurs you forward to step out on faith and take a risk?

From a public policy perspective, many issues face America. The list is long: socialist initiatives, the cooperation of corporations and government to restrict movement and thought, and government interference in our medical decisions are some of the issues that come to mind. If you’re a Christian and on the political right, these issues may cause you to believe the end of Western Civilization as we know it is a real possibility. We are living in perilous times. You may be the one that can help prevent disaster.

So don’t shrug off your responsibility. Remember the words of Mordechai. To paraphrase, if you remain silent at this time, relief and deliverance may arise from another place, but you and your family may perish. Who knows, perhaps you have come to your position in life for such a time as this? As Americans, we are becoming slaves in gilded cages. We live like kings and queens compared to people from previous eras of history, but we are losing our freedoms at an alarming rate.

Leave The Gilded Cage, Even If You Feel Fine

Many are happy in their gilded cage. Thinking of those caged birds brings a song to mind. The band REM had a hit titled, The End of the World As We Know It And I Feel Fine. I see it as a negative response to the challenge of “saving the world.”  For many, it is easier to go along with the status quo and hope someone else sticks their neck out for the betterment of humanity. It is difficult to leave a cage and especially a comfortable one.

The Time Is Now

If you realize that our freedoms are in danger, you know action is necessary. So get off the couch and do something. God placed us in the positions we hold for a reason. Whether a teacher or a tailor, a janitor or a jailer, we must be like Esther and risk everything to prevent tyranny. No matter our station in life, our daily tasks may be different, and our opportunities to restore freedom may look different as well, but our first steps should be all the same. Our first step should be the same as Esther’s first step. So it is recorded in Esther 4:15-17 (NIV).

[Then Esther sent this reply to Mordecai: “Go, gather together all the Jews who are in Susa, and fast for me. Do not eat or drink for three days, night or day. I and my attendants will fast as you do. When this is done, I will go to the king, even though it is against the law. And if I perish, I perish.” So Mordecai went away and carried out all of Esther’s instructions.]

Esther saved her people, but she started with prayer and fasting. That is a good place for us to start if we want to save the nation. No matter what we discern as our mission, and no matter our position, we should pray and fast before pursuing our task. 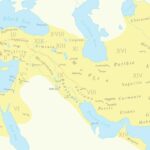 Link to license for Achaemenid  map is here.

To read the book of Esther try this link.

I Shall Use My Time & Not Waste My Days
Comfort & Courage