The Chinese Communist Party (CCP) rules mainland China. Their plan for China is likely not God’s plan for China. My cartoon-like map attempts to combine what may be God’s plan with an old Chinese idiom. There is a saying in China, “The blue sea turned into mulberry fields.” This saying refers to the vicissitudes of life or, in time, great changes will happen. Sometimes the phrase is reversed, “Blue seas where once was mulberry fields.” Again, this refers to a time of great change or a fate-changing wheel. 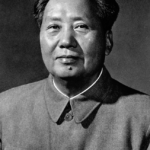 Mao Zedong Chaired The Communist Party of China For 33 Years

On November 29th, 2012, Xi Jinping (Then, the General Secretary of the CCP, Chairman of the Central Military Commission, and the future President of the People’s Republic of China gave a speech at the Road To Rejuvenation Exhibition. He said,

The above picture of Xi was taken at the U.S. State Department and it was close to the time he gave the Rejuvenation speech.

Xi also reminded his Rejuvenation audience (not the State Department audience) that:

Now, wait a minute. Rejuvenation of the Chinese nation has been the greatest dream of its people since the advent of modern times! That is a bold statement. Will anyone from any other country say such a thing about their homeland? Too often, citizens rest on the laurels of the past. For instance, Americans won two World Wars and were the first nation to put a man on the moon. So what do Americans strive for now? Think about it if you wish, but not now. Let’s stay focused on China.

I wonder if Xi believes they are ahead of schedule.

I am an American. I am a citizen of a nation that was created on an idea. You may call it a dream. Part of that dream is based on religious liberty. More specifically, on the belief in a Divine Creator. In the summer of 2001, when the Dot Com bubble busted, I had to find a different job. My job opportunities dwindled quickly. I was conflicted when I was offered the chance to help move electronic manufacturing from North America to China. I did not want to help a communist country. It went against my belief system to assist a nation that did not believe in the inalienable rights of the individual bestowed upon humanity, not by governments but by a Divine Creator. I prayed fervently to the Creator to show me what to do. I did not intend for Him to show me the future, but He did.

Then, He said He would allow a people further from Him than we were to make us suffer. He said that we would conquer them but at a great price. We would become very weak, and the more we would try to overcome it, the more vulnerable we would become. If that wasn’t crazy enough, it gets even crazier.

He said that China would move in almost every direction. I saw them spread to the north and southeast across the ocean. The voice kept repeating that we (America) would be too weak to stop the China expansion. He continued by saying once China had started the expansion successfully, great fear of a Chinese invasion would fall upon America. Only then would America seek to get closer to God. Maybe the craziest part was his explanation of why China wouldn’t invade America. It wasn’t because of our strong defense. The only reason would be because America is too much like China! I thought, “is it because they become like us, or would we become like them? Right now, it looks like we are becoming more like them. Maybe it would be the Christians in China that would stop them. The reason was not fully revealed to me.

Wait! It gets even crazier. I looked down at a globe and was told where I should stand and shout to the leaders in China while everyone else was biting their fingernails or wringing their hands in the 48 contiguous states. He told me to stand in the ocean near the edge of the East China Sea and shout into the mainland. Besides not being able to stand on water and doubting that Jesus would equip me to walk on it, another more pressing question came to mind. How are they going to hear me when I am so far away? The Lord answered, “Don’t worry; they’ll be listening.  They’ll attempt to block their citizens from hearing you, but your message will get through to some.”

Then, as the vision closed, I saw that God would deal with the leadership of China directly. I was left with the impression that China’s plans to be a superpower may come to pass but not in the way they intended. The leadership of China may get asked directly by Jesus the same thing he asked his disciples in Matthew 16:26  What good will it be for someone to gain the whole world yet forfeit their soul?

Yes, a sea change is coming to the world. Or, as the Chinese put it, blues seas, mulberry fields, and vice-versa.

What will I say?

So, if you believe me so far, you may ask, “What will I say when I shout to China?” Several things come to mind. A few of them are: 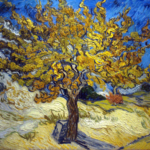 My illustration has Van Gogh’s painting titled Mulberry Tree pasted several times in the blue sea. I wanted to add a quote from Van Gogh but then hesitated. The reason is that he is thought to have killed himself. Some may receive little inspiration from such a depressed man. Then I immediately thought Van Gogh only killed himself, yet Chinese leaders like to quote Mao, and he killed millions. So perhaps it is best to conclude with a quote that is from the true road to rejuvenation. Jesus is quoted in Matthew 22:37-40:

(By the way, I did take a job that required travel to China for almost 12 years. So, there were 15 trips, each one lasting about three weeks. The quotes from Xi Jinping are from his book, The Governance of China. The extracts from the Bible are from the New International Version.)