The Birth Of Hope & An Ice Storm in Texas

I began to write a blog on the night of February 13th, 2021. I only wrote the title,  Hope – The Birth Of, and the first two sentences, “Hope is not a wish. It is an expectation.” An act of God was slowly crushing the situation of me and millions more. Instead, I wrote about my experiences as God showed me how dependent I was on him and how hypocritical I was. Perhaps the birth of hope begins with the labor pains of a storm. Ironically, the former name of the Cape of Good Hope was The Cape of Storms.

Here is my account. Wednesday, February 11th, a slow, continuous rain began with a temperature of 29 degrees. The rain continued for 24 hours. On Thursday morning, not knowing how bad things would get, I attempted to drive from my home to a substitute teaching assignment. There was a nine-car pile-up on the river bridge. After waiting 45 minutes for the bridge to be cleared, I decided to take an alternate route on icy county roads. Twenty minutes later, I had made it to the school on the north side of the river, only a mile from the bridge I had been prevented from crossing. As some students and teachers arrived after I did, some were already leaving school as the weather continued to deteriorate. 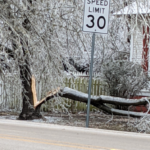 I didn’t realize that the rain and ice accumulation south of the river was much greater than it was on the north side. At a High School south of the river, my son texts me asking if he could leave school and go home. I told him he was an inexperienced driver and should stay at school; besides, there would be hot food to eat at lunch, and after a while, fewer people would be left on the roads to avoid. I thought he would be safer at school. Later, he called, exclaiming that a tree had fallen near him while walking to the cafeteria. Had he engaged in hyperbole, and it had only been a limb? I later learned that the top of the tree indeed had broken.

The Labor Pains of the Storm

The slow freezing rain continued into the late hours of Thursday night. That night the trees around my house began to bow, creak, and rub on the roof of the house. The limbs rubbing and scraping began to sound like growling. My two dogs became scared and started barking and growling back at the window as they stared at the icy trees outside. Predictably, the school was canceled for Friday.

Events begin to blur from this point forward. Over the weekend, parts of town lost power. Our power became intermittent while neighbors lost power completely. My teenage son became irritated because he could not do his online college assignments due to continually losing internet connection. Cell phone reception became worse. It became difficult to communicate with the outside world. Sunday, we lost electricity. A small pond began to form across the street. A water main had broken at the worst possible time. Neighbors began to leave. We couldn’t find a place to go that would take our dogs. Sunday was a cold and dark night.

Monday, my teenager was stressed. He worried about finishing his college assignments more than he worried about his high school classes. I wondered why the 45-minute rolling blackouts that I had heard about on the news lasted several hours and counting. I did not have access to Facebook or any other means of collecting information. Our street was deserted.

My link to the outside world was the news on the car radio that I could listen to when charging my phone. My gas tank was getting low. I felt like I could not wait any longer. If I wanted help, I would have to help myself. We followed some line trucks from our town to the next one ten miles away. The ten-mile trip on the Farm to Market Road was like driving on a slippery and bumpy dirt road. The fifteen-minute drive took around thirty minutes, but no gas station was opened in this town either. I was already committed. Now, I had to press on and find gasoline. I drove north on the Interstate to find gas.

A momentary lapse of reason

My eldest son had power but no water, and my 84-year-old mother had water but no power. I was unable to help them, and they could not help me. My teenager had to get out and push the car several times as we went around Temple, looking around for a functioning fueling station. The best stretch of road was the Interstate between Salado and Temple. This piece of the road gave me the courage to try something far more dangerous later in the day. In the evening, in a momentary lapse of reason, my younger son and I decided to strike out for Austin so my younger son could stay with his sister that had electricity and water. I would return that night to stay home alone with the dogs.

Thinking that the road would be good going south as it was going north earlier in the day was a flawed plan. The trip was treacherous. When I returned home, it was 4 degrees. I walked into a pitch-black house with two nervous dogs and an inside temperature of 52 degrees.

Tuesday, February 16th, I was determined to find a store to buy some candles for much-needed heat and light to get through the dark hours of the night. The cold night before hardened the snow and ice, and driving that day was as treacherous as ever. I found a Walmart and bought candles and found some water, and I spent the next three days breaking icicles off the house, melting them by the heat of candles, and using the melt to flush the toilet. I slept fully clothed in layers with a coat and hood in an arctic sleeping bag under quilts living on bottled water and peanut butter sandwiches.

On Thursday, February 18th, it seemed as though the rest of the world had mostly perished, for I had seen few people. What little news I heard said millions were in the same boat. I had a lot of time to think as I was collecting icicles and trimming candles, breaking the ice from around the wheels of my car, and keeping a path clear from my house to my car. Millions like me had been conditioned to believe that the government would take care of us. Life had become so easy. Typically, the flip of a switch and lights would work. Had heating and cooling become our gilded cage? Did we become the dependents to a father government?

Many blamed ERCOT for the disaster. I mostly blamed myself for not being more prepared. I grew up poor and remembered being cold as a child, and it is wise to have contingency plans and redundancy measures available. What became of my wood-burning stove, my stock pond, and propane heaters? Now I was at the mercy of an all-electric home and a woefully inadequate public infrastructure. I drove past the location where the fire truck slid in the ditch and found the designated warming shelter, not because I wanted to be warmed but to find another human being. I tried to find out if or when help would come. The shelter was about to become a disaster shelter because the water system to the community had lost a pump.

The ones operating the shelter said they would now need to prepare food, but I had more food at my house than they did. I got some of my food and contributed it to the shelter. Others did the same. Collectively we tried to help each other. Electricity and water came back online at my house on Saturday and Sunday, respectively (the 20th and 21st.)

Rahm Emanuel, a former Chief of Staff for President Obama, made a famous quote: “Never let a crisis go to waste.” My fear is not another weather crisis. I fear that we, the people stay dependent on a ruling class that continues to try to be all things for all people. The government should not take this opportunity to enable more dependency.

Edward Mote, inspired by Matthew 7: 25,26 ( a verse about a firm foundation), wrote the lyrics, “My Hope is built on nothing less than Jesus’ blood and righteousness.”The birth of hope comes with realizing that we expect Jesus and no one else to save us.