Mandate of Heaven – The Divine Right of Kings 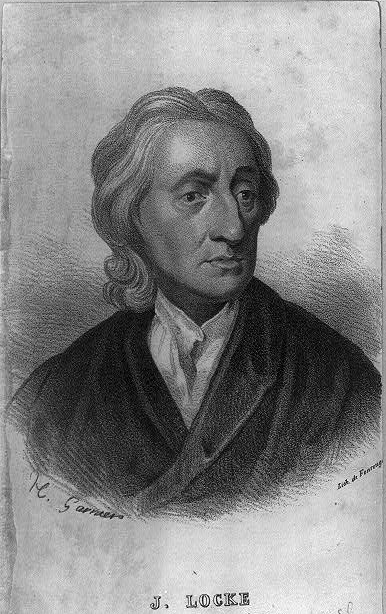 A Mandate of Heaven isn’t the same as a divine right, but it may be considered the same to many. John Locke’s First Treatise of Government lays waste to the notion that Kings have a divine right to be king. John Locke thought this idea ridiculous. Locke wrote: “To make way for this doctrine, they have denied men right to natural freedom.” He explained that “all subjects are exposed to the utmost tyranny and oppression for by these men’s system, except only one, all are born slaves.”

John Locke begins the 11th Chapter with these words: “The great question which in all ages has disturbed mankind, and brought on them the greatest part of those mischiefs which have ruined cities, depopulated countries, and disordered the peace of the world  has been, not whether there be power in the world, nor whence it came, but who should have it.” His treatise was a response to Sir Robert Filmer’s Patriarcha or The Natural Power of Kings published posthumously in 1680. Sir Robert Filmer was not the only person that believed that Kings had a right to be king. A right bestowed on them from a higher power. Throughout Europe and elsewhere, there had been a long-standing tradition that kings possessed a right to be in power.

Even the Ancient Chinese belief was that the gods only grant the right to rule (a Mandate of Heaven) if the ruler cared about his people more than he cared about himself.  It is important to note that Filmer’s theory was different than the Ancient Chinese belief. Filmer believed the king’s performance, whether good or bad, did not impact his right to be king. Whether or not these beliefs was legitimately believed or merely propaganda is open for debate. The European opinion was in the one true God, and Filmer’s corruption was that the English king and the other kings on earth could trace their right to rule back to Adam.

Locke legitimately didn’t believe in a divine right granted to kings for any reason. So, Locke’s opposition to the divine right of kings conflicts with ancient Chinese tradition as well as Sir Robert Filmer’s espoused belief. Locke lived in England and died in the fall of 1704. Yet, his ideas contributed to the American Revolution of 1776. Even Locke’s disciples who wanted no part of a king and did not believe that king’s possessed a divine right did believe in God’s providence.

For example, Thomas Paine wrote the following concerning America’s birth: “Everything that is right or natural pleads for separation. The blood of the slain, the weeping voice of nature cries, ‘TIS TIME TO PART. Even the distance at which the Almighty hath placed England and America is a strong and natural proof that the authority of the one, over the other, was never the design of Heaven. The time likewise at which the continent was discovered adds weight to the argument and the manner in which it was peopled increases the force of it. The Reformation was preceded by the discovery of America as if the Almighty graciously meant to open a sanctuary to the persecuted in future years when home should afford neither friendship nor safety.”

This view of a God that oversees nations’ affairs was still alive in the Republic of Texas’s birth. Only sixty years after writing the American Declaration of Independence, Texans were declaring their Independence from Mexico. The Texans wrote the following: “The People of Texas do now constitute a free sovereign and independent republic, and we – fearlessly and confidently commit the issue to the decision of the Supreme Arbiter of the Destinies of Nations.” This title of “Supreme Arbiter” may be misconstrued to be similar to the ancient Chinese’s views but is arguably different. 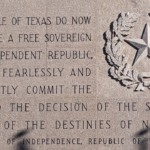 First of all, the Texans were not setting up a benevolent dictator but rather a representative republic. Secondly, nine years later, when drafting the First Constitution of the State of Texas, the Texans prepared the following: “All political power is inherent in the people and all free governments are founded on their authority and instituted for their benefit., ...” These words definitely reflect the view of John Locke. 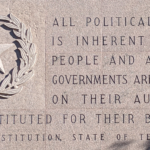 When I heard that only recently, the People’s Republic of China suggested that their president (Mr. Xi Jinping) may have a mandate from Heaven, it caught my attention. I had only recently begun reading the writings of John Locke. The United States of America’s founding is based on the same Christian view that John Locke held in the 1600s. Locke’s belief is what Texans held in the 1800s and what most Texans hold today. Even the currency of America has the inscription “In God We Trust.” China and America have different origins and have been on different paths.

Can an atheist be the Son of Heaven?

December 10 was Human Rights Day. The Secretary of State, Mike Pompeo, issued a statement announcing 17 public officials involved in gross human rights violations. One of which was the chief of the Xiamen Public Security Bureau in Wucun Police Station in China. He severely violated the religious freedom of Falun Gong practitioners.

The atmosphere created by the Chinese Communist Party cause these violations. According to the Editorial Board of the Epoch Times, a letter dated April 25, 1999, circulated among the Chinese Politburo. This letter called for the eradication of the Falun Gong. The communists see the Falun Gong as a threat to their Party’s ideology of  “Marxism, materialism, and atheism,” which begs the question. How can one have a mandate of Heaven or consider themselves to be the son of Heaven (the one chosen to execute the mandate) when they are atheists?

He sits enthroned above the circle of the earth,
and its people are like grasshoppers.
He stretches out the heavens like a canopy,
and spreads them out like a tent to live in.
He brings princes to naught
and reduces the rulers of this world to nothing.
No sooner are they planted,
no sooner are they sown,
no sooner do they take root in the ground,
than he blows on them and they wither,
and a whirlwind sweeps them away like chaff.

Nations are in the Potter’s hand

A proper mandate of Heaven

If you are from the USA, re-read the above passage from Jeremiah. This time, replace “Israel” with “America.” If we want to save our republic, we must first repent of our evil. Consider the words of the prophets Isaiah and Jeremiah. We are as grasshoppers to the Lord God Almighty, and he wants us to repent of our evil. Repentance is the proper “Mandate of Heaven.”

If you are from China or some other nation, it is your turn to re-read Jeremiah’s passage.  This time, replace “Israel” with the name of your country. I conclude my remarks with one more verse from the prophet Isaiah 61:11-(NIV)

For as the soil makes the sprout come up
and a garden causes seeds to grow,
so the Sovereign Lord will make righteousness
and praise spring up before all nations.